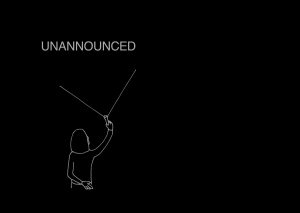 With their creation unannounced, Heine Avdal & Yukiko Shinozaki focus on the way focus shifts when appearances change out of the blue. What, for instance, if a social situation’s framework suddenly shifts – like when a performance subtly starts among a waiting audience in the theatre’s foyer? What if it doesn’t even continue on stage, but first splits the audience up into smaller groups and invites each of them for a guided tour through other rooms of the respective building? What if, eventually, one of these rooms turns out to be the stage, in fact, but a stage on which the spectators find themselves among the performers – and vis-à-vis the tribune where they are usually supposed to sit? And what, finally, if the performance continues on this tribune as well, highlighting the entire theatre space as a site of negotiation with regard to the possible ways to position oneself – both among others and in relation to conditions which continually turn out to differ from what they were expected to be?

On its way into the black box, unannounced blurs the conventional distinctions between the ‘outside’ and the ‘inside’ of the aesthetic event, both in spatial and in temporal terms. By means of portable mini-projectors and torch lights, it literally goes into detail and sheds light on the small and smallest characteristics it passes by, highlighting them as fragments and partial aspects which disappear as soon as the next one shows up. The spaces and situations it passes through are both scanned with regard to their specific concreteness and charged with imaginations that transcend their actuality. A discontinuous, non-linear range of sensations unfolds, which possibly confuses the anticipation of its future with echoes and afterglows from its past. In the border zones of performance, dance and visual arts, unforeseen alliances between body and image, text and movement, light and sound, concreteness and abstraction emerge, and eventually, the ‘liveness’ of performance finds itself contained in a still-life – and vice versa.

TANZ Magazine on ‘unannounced’:
“With unannounced, Fieldworks have created an intelligent work about theatre that reflects the many-faceted interdependencies between text and space, set, audience and stage. At the same time, inventive lighting and sound specialists have added their own quite specific way of looking at things. And although the piece does not spare scenic effects and sometimes ascends to the orgiastic, if not the infernal, the work itself is subdued. This is down to a delicate approach to humour and the sincere restraint of the performers.”

produced by: fieldworks (BE), Heine Avdal (NO)

coproduced by: PACT Zollverien (DE), BUDA (BE), BIT Teatergarasjen (NO), STUK (BE), Kaaitheater (BE), Teaterhuset Avantgarden (NO), Black Box (NO)
with the support of: Norsk Kulturråd, Vlaamse Overheid, Vlaamse Gemeenschapscommissie, apap – performing Europe 2020 (co-funded by the Creative Europe Programme of the European Union)

special thanks to: Vooruit (BE), Netwerk Aalst (BE)